For the brown algal project on Ectocarpales diversity the sampling was initiated around Bergen during May 2021, in the intertidal, and in the subtidal during August. A view from the sampling sites in May: 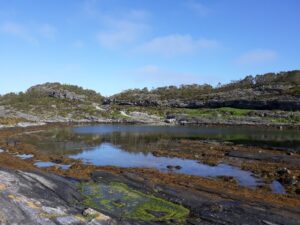 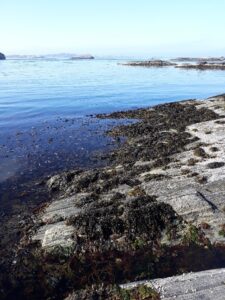 Successful COI-5P sequences for Asperococcus bullosus, Spermatochnus paradoxus and Acrothrix gracilis, among others, were obtained. However, samples of Scytosiphon and Petalonia were difficult, probably due to epiphytes interfering with the sequensing. And why we absolutely want to get samples of these two genera? Because they are very common, and it has recently become clear that more species of these two genera exist along the coast of Norway than earlier assumed, see Bringloe et al. (2019).

Another lesson learned was that the minute Ectocarpales may be easier to find than initially thought, one just needs to look very closely. Several taxa visualized themselves as epiphytes on other algae. However, I only managed to identify (with some degree of confidence) Myriactula choardae, which appeared as an epiphyte on Acrothrix gracilis, and the lab work produced a COI-5P sequence.

On first sight Myriactula chordae could resemble an extremely small Elachista sp. The basal part consists of densely packed filaments, carrying a tuft of upright uniseriate and unbranched filaments, much in the same way as Elachista does. However, the size of it was only about 1 mm, and it also had relatively large unilocular sporangia and brown algal hairs protruding from the basal parts. 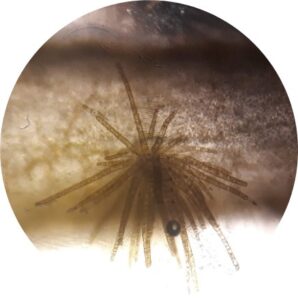 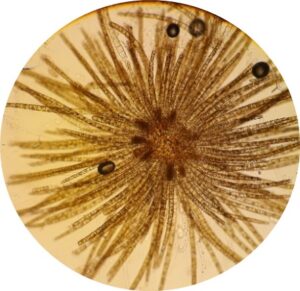 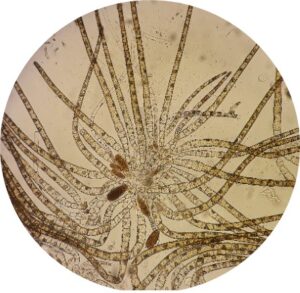 Tree more species belonging to the genus Myriactula have recorded in Norway; M. fucorum which can be found in cryptostomata of Fucus, M. stellulata which is associated to Dictyota and M. haydenii which can be found on Scytosiphon.